Dogs in Afghanistan: The Drop

I love my dogs. I have a German Shepard mix and a Lab mix. They are adorably goofy and scare the hell out of strangers, which is what you look for in a dog in South City.

I was not always this keen on dogs, however. Being raised with cats trained me to regard household animals as they do me, occasional furniture that can feed me in a pinch. When my wife and I bought a house and moved in together, I began to live with a German Shepard. Then we got the Lab mix and he became my favorite animal that I don't have an eventual cooking plan for.

But there was a time before. A time in Afghanistan when I was 20, friendless and constantly on guard.

There are three stories involving dogs in Afghanistan I will eventually tell on this blog. I will do this through lego and photoshop while drinking rum.

So this is me


I am a journalist for the Army. You can tell by the camera in my hand. During a humanitarian mission I was covering in Afghanistan, a man brought by his heard of camels through a dried out river bed near our position. Generally, we would go out into the middle of what seemed like nowhere and setup shop. People would bring by their animals and themselves for medical attention.

So yeah, here comes a guy with a bunch of camels.

Being the photographer that I was, I decided to climb down the embankment to the other side of the river bed to take photos. I needed to get the same shots of the same camels from the other sideIf you are a photographer, you will understand why it makes sense. Each side was about ten feet down of loose dirt.

You know, maybe it wasn't an actual dried out river bed. Maybe it was just a weird ditch that was really deep. I don't have the actual photos. This was a time when I didn't truly understand "backing up data" as some may call it. I think I only came out of Afghanistan with about thirty photos. Thankfully, important ones survived.

Anyway, as I stood there taking photos, I hear a barking in the distance. Here comes a giant dog barreling directly for me, ready to protect the hell out of whatever the people around there had to protect, which amounts to mostly dirt and opium.


But hey, that dog was way off in the distance. I had plenty of time to make a leisurely escape back across the ditch. The camels had moved out and I attempted to maintain my composure.

Now, it's important to note at this time that Afghanistan was pretty loose in 2004, especially when it came to Civil Affairs missions with the local populace. There was a laid back atmosphere to the Americans. Keep in mind, this was way before IEDs became a thing to worry about.

I tell you all this because it sort of explains why I was running around without my body armor and my weapon, the M9 pistol, shoved down the back of my pants. There will be some Soldiers who will say that was irresponsible, but don't worry, I kept it on safe and rarely had a round in the chamber.

So as I slide on down one side, trot across and start to climb the other side. Before climbing, I casually turn and HOLY SHIT THE DOG IS AFTER ME.

I have created a visualization. 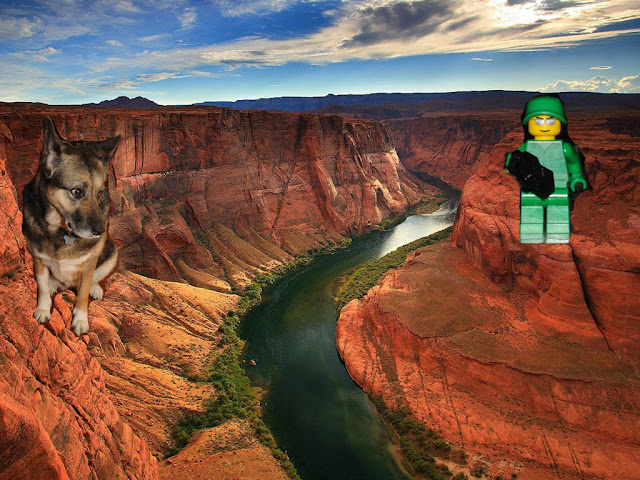 Here's the next problem, pointed out to me by the Soldiers holding security: I dropped my weapon.

Don't just move on to the next photo, I dropped my god damn military issued 9mm pistol. This is not something that a soldier just allows to happen. My main defense weapons system was now on the ground.

And it is now between myself and the dog. A ravenous, blood thirsty terrorism dog!

Here's a better graphical representation of what was going on.

I'm sure it wasn't as bad as I remember. The brain is a stupid thing that freaks the hell out when you're running from the Afghan Cerebus.

So the dog is tearing down one side, teeth gnashing and the blood of its last victim frothing from its lips and I have a decision to make. Leave the pistol or fight for it. The soldiers on the .50 cal machine gun were no help. How could they? They could have hit me!

So I run, I grab the gun and wheel around to throw myself at the side of this ditch and scramble up. When I get to the top, I realize I was being chased by some kind of dirty ankle biter of a dog. I was also being mercilessly mocked by some battle hardened infantry Soliders.

More than likely, it  was more along the lines of this.

Memory is a funny thing. Also, those guys were assholes. The Soldier, I mean.